On the 1st of February 2022, Surfshark published the news about them joining Nord Security, which is the company that runs NordVPN.

This might come’s like a surprise for many VPN users or VPN review readers, but not for me.

In my VPN egress point article from February 2020, I already saw a common pattern of the selection of VPN egress points used by both Surfshark VPN and NordVPN. I wrote in this article:

When looking at Surfshark’s selection of internet egress points, it is very much a copy of what NordVPN is using as well, with the difference that Surfshark is not using as many different egress point providers as NordVPN. But we see M247 Ltd, Datacamp Limited, and Hydra Communications been used by Surfshark at the same locations where also NordVPN is using those. Is this a coincident or do both VPN providers have a hidden connection to each other? I keep that question open for speculations.

While writing this article, I also analyzed two countries VPN egress points more in detail. Taking a look at some the egress points in Sweden and Switzerland, used by both VPN providers.
The results of very tight overlapping IP addresses, connected to different “connect to” servers are shown in the picture below. Do you also see the pattern? 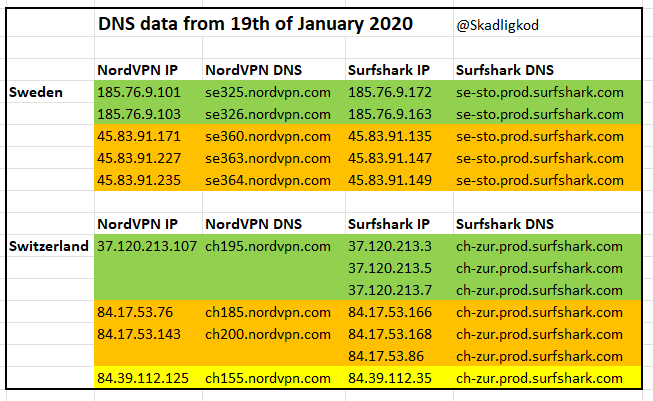 Well, I never wrote about it at this time, as I wanted to investigate this even further, but didn’t due to lack of time.

Connected to those findings from January 2020, I’m not surprised to read today that Surfshark is suddenly “joining” the company who runs NordVPN.

This merging is maybe also a sign of that the commercial VPN market is not as hype and profitable in 2022, as it was 2-4 years ago? Who knows……